This blog is written by Ahmed Goher, Economic Research Forum

From 2010 to around mid-2012, uprisings swept MENA in what has come to be known as the ‘Arab Spring.’ While bread was at the forefront of the demands of protestors, shouts for freedom and social justice were also heard across the region. It is with this in mind that many countries of the region embarked on messy democratization processes with the tacit understanding that democratic regimes are more conducive to development. 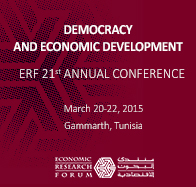 Both theory and empirical evidence, however, are inconclusive when it comes to the impact of democracy on economic growth and distribution, on the one hand, and the impact of growth and distribution on democracy, on the other. For one thing, conceptions of democracy are not uniform, but often take different forms with varying repercussions on policy-making and development when they materialize.

In this context, the Economic Research Forum (ERF) announced that it will hold its 21st Annual Conference in Tunisia, March 20-22, under the theme of ‘Democracy and Economic Development.’ The conference has come to be recognized as the premier event for economists in the Middle East, bringing together over 150 policymakers, economists and political scientists.  Through a number of plenary sessions, participants at the conference will seek to uncover and understand the link between democracy and development, the possible impact of different forms of democracy on development and how to best navigate the transition towards democracy in the Arab world.

Moreover, the conference will comprise the presentation of over 40 research papers in 6 parallel sessions under the themes of Macroeconomics, Microeconomics, International Economics, Finance, Labor and Human Development, and Institutional Economics. Additionally, two special sessions will be devoted to the areas of transition and inequality in the Arab World – domains on which ERF has done a lot of work over the past few years. Last but not least, the closing session will be devoted to celebrating the six winners of what has become a regional mark of excellence: The Best Paper Award.